Week Facebook made available accidental in Apple App Store application Slingshot, Which then withdrew it with brief explanation that the application will be launched soon. Well, those curious to know exactly what it did not have too long to wait, today the application is officially launched both version iOS and one for Android (But currently is available only on within the USASo curious in other regions it seems that will have to wait a while). 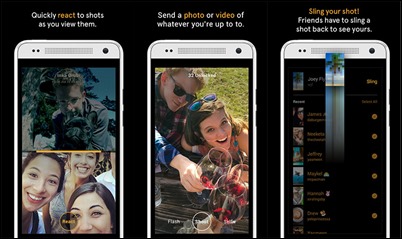 If you're wondering what exactly is Slingshot application, Well this is very similar to the already popular SnapchatAn application through which users Mobile send Photo posts or Temporary videoThey are available only for a limited period, Then disappear without a trace (messages will not be recorded on any server si can not be recovered after the expiration thereof). But from Snapchat, Slingshot comes with a significant change, Namely that the user receives a message (photo or video) can not see that message unless you send one back (Yes, first send a response to the message, then just click on the email).

How Slingshot still not available worldwide and has just been released, remains to be seen if it will have Successful users or if restrictions imposed by it (restrictions that are imposed on what is practical application) will cause the application to become the next big failure of Facebook (After Facebook Home).