It was officially announced that Samsung we have a new edition of Galaxy Edge S7Which is called injustice Edition. The mobile device has the same technical characteristics as the standard model, but it differs with the gold inserts and the Batman logo on the back. 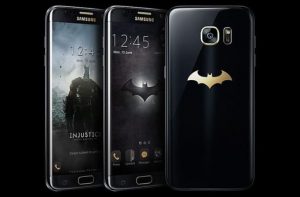 "We are excited to partner with Warner Bros. Interactive Entertainment and offer a special edition of Galaxy fans S7 Edge for Injustice: Gods Among Us"According to a press release Samsung. The package is delivered Samsung smartphone It includes a Gear VR headsetCredits and vouchers for the game Injustice content available for Oculus VR. However, the content of the package may vary depending on the country and the telecom operators through which the smartphone is distributed. Galaxy Edge S7 Injustice Edition It will be available starting on June 13, but only in certain regions, among which are China, Singapore, South Korea, Latin America and Russia. Price smartphone has not yet been announced.