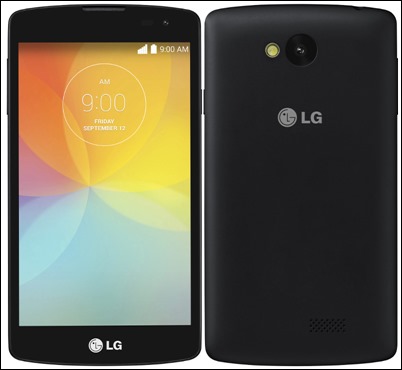 through specifications LG F60 included the following: IPS de 4.5 inches cu WVGA resolution, Quad-core processor Qualcomm Snapdragon 400 de 1.2 GHz, 1 GB RAM, 4 or 8 GB Internal storage space, slot microSD and battery 2100 mAh. In terms of smartphone cameras they are quite modest, main room a sensor having only 5 MP (Equipped but with LED flash) And front camera is one of 1.3 MP.

As design, LG F60 differs from the two terminals launched in the summer (that's copied flagship design LG G3), Its appearance is one classic plain, which reminds us of Nexus Series.

The device will run the operating system Android KitKat 4.4.2 and will be available in version Dual-SIM. Also, in addition to LTE support, F60 provides connectivity HSPA +, WiFi, Bluetooth 4.0, NFC and support GPS Compass. Launch Smartphone will be held this week in Europe, and price it would be about 150 €.