Although it is not doing very well financially, the Canadian company BlackBerry do not give up. New leaks confirm that in addition to a new version of the model "Classic", Which the company has already launched, there are three more smartphones under development, which will be announced later this year. It is about the mobile device with sliding keyboard presented at MWC, Along with two phones evolved from smartphones already on the market.

Officially, the company announced that BlackBerry Classic will come in white, without differ in any way from another version already released in December 2014. It will include the same hardware, same design and will offer the same functionabilitate. BlackBerry OS 10.3.1 comes preinstalled on the smartphone, with features such as BlackBerry Blend, BlackBerry AssistantAs well as support for native applications BB OS si Android via Amazon AppStore. In terms of unofficial information, we have some images that describe the three phones ready to be launched in 2015. The first, the model with sliding keyboard, is probabil the most interesting and the one that will bring you the most news in the company's range. At the moment, it is called BlackBerry Slider (Code name Venice) And will provide a screen aspect ratio 16: 9. 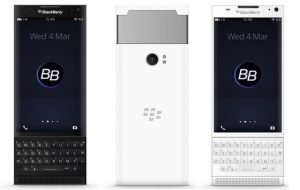 The images describe a display with curved edges, not very different from the one we find on Samsung Galaxy Edge S6, but it is not clear whether we are talking about a curved panel or just a case that mimics curvature. The available information suggests that the 5,1-inch display will display a resolution of 2560 x 1440 pixels and will be next to a procesor octa-core, a 16 megapixel camera and a 5 megapixel one, as well as a 3.650 mAh battery. All the details suggest a new flagship of the company, in a unique format. The other two phone models BlackBerry that appear in images are photographed only partially describe similar designs but current models on the market. The former seems to be a follower of Passport and called Oslo. It integrates a keyboard and a screen similar to three times that seems to be square. The body of the device is somewhat different and the color is white device, unlike the blacks in that Passport is launched. Apparently the resolution will remain 1440 x 1440 pixels, prothe Caesar of Oslo will be Snapdragon from Qualcomm 800And 13 megapixel camera will provide optical stabilization. All these specifications will be powered by a battery with a capacity of 3450 mAh.

The latter model BlackBerry It appears to be a new variant Porsche Design (P'9984 model), with which it adopts a shape whose corners are "cut". It is possible that this luxury version will also be based on the Passport model, offering similar hardware, but in a case with a more special design, as well as a construction made of matehigh quality materials. Unfortunately, for the new BlackBerry Porsche Design no more details about technical specifications. The pictures were posted on Chinese social network Weibo on account dtblackberryWhich has previously provided information that have been shown to be true about the devices BlackBerry who still had not come on the market.

Phone Turing, most durable smartphone, made of liquid metal