As I wrote some time ago, Viber It is a dedicated service smartphonefixes may iOS (iPhone, iPad) and Android which allows us to free calling and sending messages, anywhere in the world. both messaging as well as voice, Viber uses packet data (Wi-Fi or mobile internet 3G). Specifically, that we can call a friend on Viber, two conditions must be met. To have Viber installed on Android or iPhone and be connected to the Internet.

If we are not in an area with Wi-Fi access, we can use the data packets of the mobile operators, and it should normally go smoothly. I refer here to those who have prepay cards or internet subscriptions (3G) included.
Pe Orange si CosmoteAll well and good, but the Vodafone there is a problem. neither Viber nor Skype They can not be used in network Vodafone RomaniaEven if we have a data package included in the subscription. I have a subscription to Vodafone 500 MB Internet traffic included, but I noticed that if acoperare leaving the area of ​​a Wi-Fi networks, although they are connected by 3G, Viber becomes impractical. 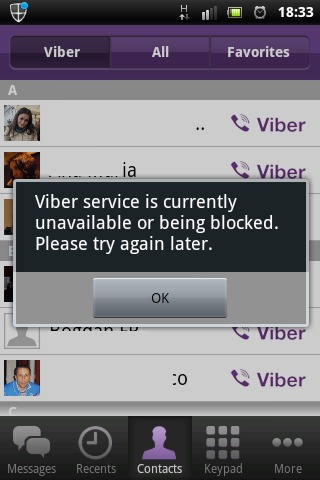 I called the * 222 (Vodafone Customer) And I got an unexpected answer. After I explained the problem and I think that access to Viber si Skype is restricted, the operator replied that there is no restriction, just as are "filtered"some ports. In simplest terms, filtering a port in order to prevent access to an application, it means fixed restriction. In fact later confirmed even by the operator who told me that Viber for access will have to pay Euro 3.5 in addition, over voice and Internet subscription. I asked surprised if those 3.5 euros longer receive something extra. Not only access applications that use video and voice calls, even if those applications did not necessarily VoIP technology operator.

In conclusion, Viber can be used with decent prices and without extra options aberrant only Orange and Cosmote (Subscription or prepaid). Vodafone had blocked access to internet applications that allow free voice and video calls.