NOKIA has owned and still owns the supremacy, but the integration of new operating systems Android and Windows Phone 7 on the new generation of competing devices, has made NOKIA consider launching the first mobile phones with Windows Phone 7. Even if prothe "home" shower from NOKIA, Symbian, received updates and upgrades, it did not break the fair. 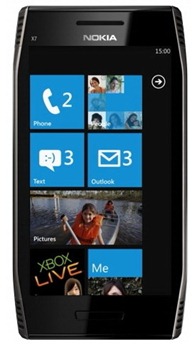 Nokia W7 device will be similar in performance to HTC MotzartAnd the design will be drawn in lines Nokia X7. The main difference between Nokia Nokia W7 X7 and future, will be WVGA screen.

The device will be launched the most proin the second half of 2011, and in 2012 NOKIA announces the launch of over 16 new models of mobile phones with operating system Windows Phone 7.

April 28, 2012
Back to top button
Close
Close
This site uses local cookies to give you a good online experience and cookies from Google and third partners for traffic and marketing analysis. Find out what cookies are used, what it is used for, and how you can turn it off by following the "Cookies policy" link. OKCookie policy