Samsung said he is working on next generation smartphones Galaxy NoteWhich kicked off phablet category worldwide, after a few years. There have been a number of leaks and rumors about the next series of the popular large-screen phone Samsung Notes in the past few weeks.

Samsung Galaxy Note III Anecdotal rumors will be referred to as SM-N900 with a screen 5,7 inches, which will be the most probabil a panel Super AMOLED similar to other high-end devices Samsung. The display is expected to be full-HDWith a resolution of 1080 × 1920 pixels. It seems that the future phablet Galaxy Note III, And will include a Xenon Flash and a camera 13MP.

Regarding the software, there is speculation that Samsung can load the latest version of Android, Android 4.3Which is expected to be presented to the next generation of tablets Nexus in the coming days. 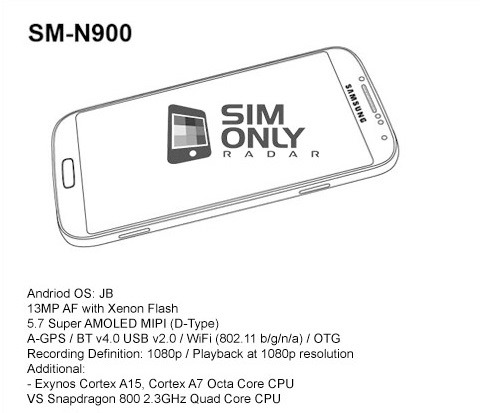 Samsung Galaxy Note III it is rumored to be propulsed by a procesor 5 Exynos Octa with a clock speed of 2,3 GHz. Recently, Samsung announced the next generation ProCesta Ocyn Exynos 5Which is also expected to be released this week. Note III could come up with 3GB Memory RAMAs suggested by some reports.

Samsung Galaxy Note III is rumored to have a camera 13 megapixel camera on the back with Xenon Flash and support for full-HD recording. Like its predecessor, Galaxy Note II, The phone is also provided with a S-Pen (Stylus) and a suite of applications preloaded with it.

Previously, it was reported that Samsung Galaxy Note III is probabil to be revealed in 4 September 2013.