family smartphones Xperia X brand Sony it's getting bigger. The model that will appear this summer called XA Xperia Ultra and will be a display device with high and mid-range specs, dedicated to lovers of Selfies, which is accessorized with a large sensor on the front. So it seems that all smartphones which Sony will launch from now on will carry the label X, announcing that the company dropped the series C and M, after, in March, he stopped series Xperia Z. 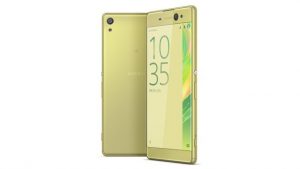 The new XA Xperia Ultra comes bundled with a giant display that measures 6 "diagonally, but we mention that it retains the Full HD resolution (1920 x 1080 pixels) of smaller devices in this range of smartphones. It is based on a MediaTek chipset mid-range MT6755, capable of providing decent performance for most common functions and is equipped with 3 GB of RAM, already standard for proshowers in this market segment. The 16 GB internal storage space is quite small nowadays, though Sony has integrated a microSD card slot, which can supplement up to 200 GB.

The photo system is the main attraction of this model, Xperia XA Ultra featuring the same 21,5 megapixel top sensor on the rear and a giant 16 megapixel sensor for the front camera. It comes not only with high resolution, but also with optical stabilization, being the second one smartphone that provides this capability by HTC 10, as well as a front flash for optimal photos in low light conditions. No price has been announced for XA Xperia Ultra and no release date, but Sony has promis that will bring the phone to stores in July. It will be available in white, black and "lime green" and will offer two days of autonomy, thanks to the 2.700 mAh battery.