Facebook a recent confrmat intention to include in a new mobile application feature that will allow users of the social networks to post on timeline messages predefined expiry dateThey will be automatically deleted after expiry of the time set for before posting. Feature is available now, with experimentalin Facebook application for iOS.

We're running a small pilot of a feature on Facebook for iOS that lets people schedule deletion of their posts in advance.

users Facebook can post temporary postsThe period of validity for these variables between one hour si 7 daysFor then those messages will self-destruct and will disappear completely from the timeline. 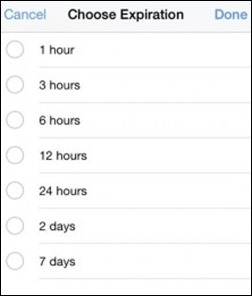 However, although temporary posts will be hidden timelineacquis users, they will not deleted from the Facebook servers immediately, but will remain in the offline backups si logs for a period of up to 90 days.

Google has launched proAndroid One project

GOCLEVER has launched the INSIGNIA 700 PRO, a cheap tablet with Android 4.4 operating system