No matter how good the hardware configuration of a smartphone is, the only thing prothe owners of these mobile devices have not yet managed to improve it so much as to satisfy the users is the battery life, in the best cases it reaches a maximum of 2 days (and this in the conditions in which the terminal is used for the minimum necessary such as calls or text messages). For this reason, many users prefer to buy spare batteries or portable chargers for the smartphones provided, to ensure that they do not run out of means of communication in various situations in which they may be at some point. Usually, however, these backup solutions, in addition to hating the look of the phone (as is the case with spare battery cases) and take up space that we sometimes do not have on devices, are far too easy to forget behind.

If you are among your users and they need a backup often in terms of smartphone battery, Talk is a solution on how elegant as it is effective.

Talkase is a credit card-sized phone (prodesigned to function as a backup for situations where the smartphone runs out of battery), consisting only of the keyboard and a minimal display, capable of making and receiving phone calls and text messages and whose autonomy can last up to 100 hours in standby. The device can be used as a standalone phone, it is compatible with micro-SIM cards (users can use the same card from the smartphone in the phone if it runs out of battery), or it can be connected to the smartphone via Bluetooth.

For iPhone 5S, 6 and 6 Plus users, Talkase comes bundled with a case profor those devices, the backup can be easily stored on their backs. In fact, due to its size and thickness of only 5.5 mm, Talkase can be easily carried in your wallet or pocket, without bothering the user. 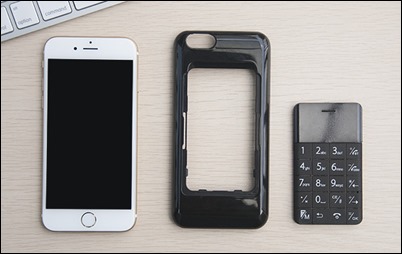 Talkase is currently available in four colors, namely black, white, blue and orange, and can be ordered by those interested through the official website of proproject on Kickstarter.

Evolio launched Axis 7 HD, an Android tablet at a price more affordable than