After some time, BlackBerry announced his intention to return to the classical model of mobile business which brought the company success in previous years. The first such models Mobile to be launched is included Blackberry Q20A phone with QWERTY keyboard which until a few days ago did not know other information besides the name. Recently, however, the Internet has emerged so mysterious phone pictures, and list specifications thereof, so far unconfirmed. 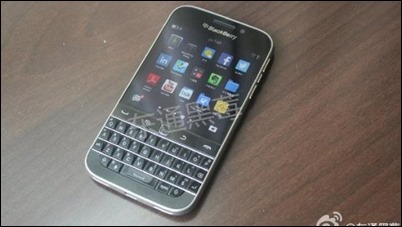 BlackBerry Q20 is apparently a mid-range terminalBuilt especially for fans Classic BlackBerry phones who want to replace older devices. It will have a 3.5 inch touch screenWhose resolution is still unknown, and will run a procesc Qualcomm Snapdragon S4 1.5 GHz. The device also will include 2 GB of RAM and QWERTY keyboard with 35 key for editing and additional buttons for answering and closing calls, and a button HomeA button back and a button tactile surface which allows browsing without having to touch screen.

Regarding BlackBerry launch Q20, although the terminal has already been announced by the company, it seems that it is not included in the list of launches programate for 2014, according to a leak that appeared online in recent weeks.