Sony announced today the official blog launch Xperia smartphone C3, Also called Proself or "best selves smartphone the world. " The thing that differentiates Xperia C3 other smartphones boast that can capture Quality Self is LED flash dedicated, located near front camera of the device, and a lens wide angle 25 mm, cuun camera field of view wide 80 degrees (In terms megapixelsCamera has only 5). 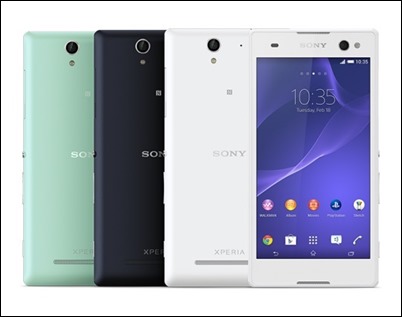 In addition, Sony added and how Superior Auto front camera so that it can select the best image and to Adjust For this purpose, according to the brightness available. The room also includes a HDR and provides access to a variety of tool optimized sites for Selfie: Portrait Retouch, AR Effect etc.

LED flash, Never before seen in Front rooms of smartphones causes much weaker light than standard flashcardsTo protect the user's eyes and to make as portrait photos be made close to photogenic.

Although Sony confirmed the availability of the Xperia C3 worldwide, currently has not been confirmed until Dual-SIM version for ChinaWhich will be launched in august.

August 17, 2013
Back to top button
Close
Close
This site uses local cookies to give you a good online experience and cookies from Google and third partners for traffic and marketing analysis. Find out what cookies are used, what it is used for, and how you can turn it off by following the "Cookies policy" link. OKCookie policy