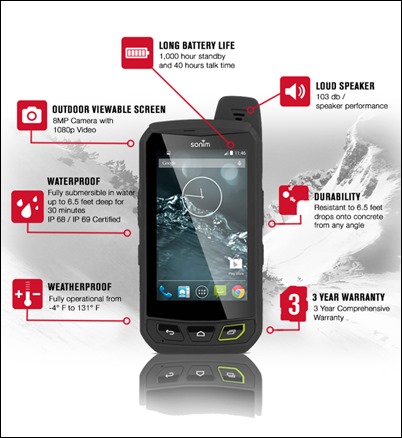 Housing XP7 not only exceeds standard requirements IP68 the resistance to mechanical shock and bumps, but is also perfect seal (protects device under water for at least 30 minutes to a depth of 2 m) allowing her to film or take photos underwater. Also, the terminal is immune to dust and sand and mud.

In terms of hardware specifications, they are far superior to other phones designed to withstand extreme conditions: XP7 offers a WVGA screen of 4 inch high visibility exterior (acetates can be used with gloves), quad-core 400 1.2 the Snapdragon GHz GB RAM 1, 16 GB internal storage space, room orincipala of 8 1 MP and MP secondary camera. The battery that comes with the device, the 4800 mAh, promises a range of up to 40 hours of talktime and even 1000 hours in standby.

Sonim XP7 will be released only in March 2015 and will be offered to those interested through a campaign Indiegogo priced at $ 578 package including a Bluetooth headset and a waterproof Prepay SIM worth $ 49.

HTC is preparing to launch a new mid-range terminal, Desire 620