Speculation about the figure in the name of the new Galaxy Note phablet according to which specialists Samsung could not decide between 6 and 7 were elucidated. The first images with Galaxy Note7 in all its splendor. 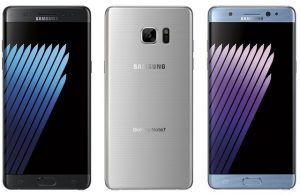 Evan Blass published a picture where we can see the new Samsung Galaxy Note7. Blass states that these are unreleased official press images and that they describe all three colors in which the new terminal will be available in stores: Black Onyx, Silver Titanium and Blue Coral. The back of the device is the one that reveals the official name, "Galaxy Note7". It can be seen that it has a more square design than Galaxy S7 si S7 edge. According to the images, the new Galaxy Note7 will not be delivered in a flat display version, the standard version being delivered with a curved screen. The back of the phone seems to be cosmetized with a striped pattern, which should differentiate the phone from the series Galaxy S7.

The new mobile device will keep QHD resolution, used on last year's model, and chipset cameras and waterproof variants S7. The big difference could be RAM, rumors suggesting integration of 6 GB of memory.

But even with evidence in the form of photographs, we can not be 100% sure that this is indeed Galaxy Note7… So a little mystery remains!