After success with Galaxy Note 2Koreans from Samsung continued to increase the size of the tablet series Notes and reached 8 "(too much for a smartphone and a little less serious for a tablet). The new phablet from Samsung completes the tablets of the Samsung, with a multitouch display 8 "TFT with a resolution × 800 1280 189 pixel density ppi. Hardware platform that runs Android 4.1.2 Jelly Bean is based on a Samsung Exynos 4412 chipset, a Cortex A9 Quad Core processor clocked at 1,7GHz and Mali GPU module 400MP product that provides the most advanced hardware implemented on a tablet. 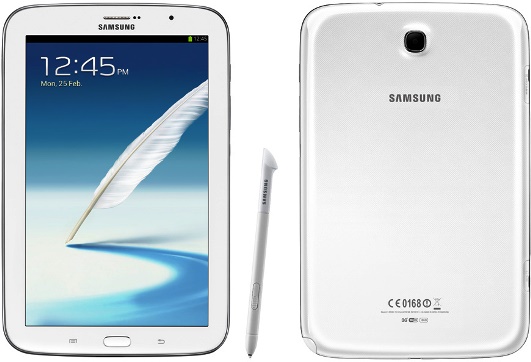 The internal memory of 16 or 32GB can be expanded via a card microSD up to 64GB and memory RAM The 2GB provide all the necessary hardware to achieve high performance in operation. New phablet Samsung Galaxy Note 8.0 was presented with the opportunity MWC 2013And the new features implemented in this tablet recall Multi-Window the ability to split the screen into multiple parts, the technology Reading Fashion adjusting the contrast of the display to make it easier to read the text, the application Note Awesome to take notes and to maintain a journal and last but not least the function Smart Remote you can turn through infrared gadget into a high-performance remote. 8.0 new Samsung Galaxy Note will be available on store shelves beginning in April and will definitely be looking for those who want a phablet Efficiency and accessible.