Although of all concepts Modular smartphones only recently made public that is likely to see a launch is ProAra ject of those in GoogleMore recently it seems that the first such modular device will hit the market will be PuzzlephoneProject a Finnish company called Circular Design. 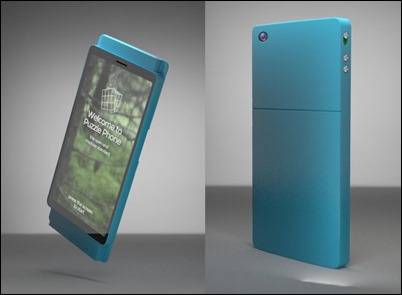 Even if Puzzlephone offers fewer opportunities hardware customization than ProAra ject, it will consist of only three module main, each grouping several hardware components together, it can satisfy the need for users to upgrade the two most important features of a smartphone: performance si autonomy.

The three modules of which will be made device received from the company producing the names of three vital organs of the human anatomy, namely spine, brain si heart.

The spine represents the project, which can be connected to the other two modules, which is composed of LCD panel, physical buttons, speakers si microphone. Heart include batteryWithout which no-one smartphone can not work, and other Electronic components secondary, which are not absolutely necessary, but can add more special device functionality (such as sensors and antennas or modems Connectivity) and The brain consists of hardware platform (processor, RAM, internal memory and other elements necessary for the functioning of a smartphone) and sensor camera / video.

After presentation of the project, those from Circular Design announced that the first prototip its will be completed soon, the company hopes to official launch Puzzlephone in the second half of next year.