Nokia officially launches its first devices with Android, these being called X and X +, on the stage of the Mobile World Congress annual press conference. X will have 4 inches, 840 x 480 IPS screen, 512MB RAM, 4GB microSD card slot, and 3MP camera, while X + Android has X, 768MB RAM and included the 4GB microSD card . It does not contain applications Google or the Games Store, but in any case they are based on AOSP Android BONE. In the Nokia Store we can find Here Maps, MixRadio, Skype and Outlook. You can access all of this from the Nokia Store, but without it Google Play. 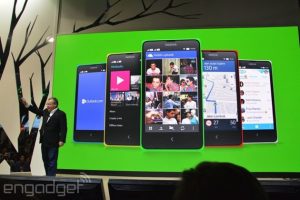 The new devices include a portable version FastLane Asha devices to provide a similar experience as the other phones. These two devices have some type of notification that shows recently used apps, missed calls and messages, as well as other activities. Android X is available in big stores and cost 89 euros. While android X + will cost 99 euro, but will not be available until the middle of this year.