After two weeks, Verizon announced a maintenance update mobile phones Motorola Droid RAZR US update that would bring a number of improvements feature sites this smartphoneThinnest of those already on the market, with a thickness of just 7.1 mm.

Well, it looks like the new year came with good news for owners of these smatrphone Europe's, Motorola making newly available software update and for Droid RAZR European version. Update your gate number 651.73.30 and brings a number of Feature sites and applicationsSuch as the new version EvernoteAnd improvements to existing ones, such as a Bluetooth connection performance. 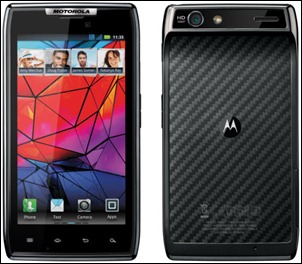 Update your software for Motorola Droid RAZR is available OTA (Over The Air) in the following countries: Czech Republic, Greece, Hungary, Italy, Luxembourg, the Netherlands, Romania, Finland, Denmark, Serbia, Sweden, Germany (network T-Mobile), Great Britain, Slovakia, Spain, Poland and Norway . Motorola RAZR If you are the owner and you have not yet received the update, check if it is available Phone Settings.

Samsung Galaxy Y Duos, Dual SIM smartphone to take into account, which will be released in 2012

Motorola Droid RAZR announces: will be the thinnest mobile phone

October 19, 2011
Back to top button
Close
Close
This site uses local cookies to give you a good online experience and cookies from Google and third partners for traffic and marketing analysis. Find out what cookies are used, what it is used for, and how you can turn it off by following the "Cookies policy" link. OKCookie policy