Motorola has just announced a improved versions terminal Moto XAnd afterwards have a generous screen than the previous model and improved specifications, In which is included a faster processor. 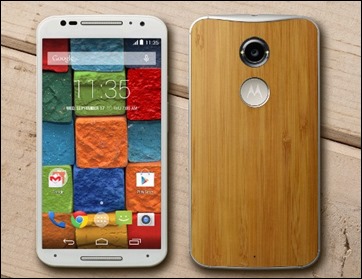 The new smartphone Moto X XT1052 is noted by a new designwith polished metal frame and caps available in various colors and textures, which include imitations for wood bamboo or leather. In terms of specs, the device includes a 5.2 inch AMOLED screen resolution 1080p and protection Gorilla GlassChipset Snapdragon 801 cu quad-core processor de 2.5 GHz si Adreno GPU 330, 2 GB RAM, The main room 13 MP cu dual-LED flash and support for shooting 4K, 16 GB or 32 GB Internal storage space and battery 2300 mAh. The device will run the operating system Android 4.4.4 KitKat and will also has a system controls gesture implemented by means of a set of infrared sensors.

The new Moto X will initially be available only in some regions (USA, UK, France, Germany and Mexico), the price $ 499.