For several weeks circulating online information about decision Microsoft to quit Nokia brand for smartphones launched by the company, they will still bear the name Lumia or, simply, Microsoft. It seems that this is true in terms website for mobile Microsoft's brand, the company yesterday launched the official website post was Nokia for mobile devices, called simply Microsoft Mobile Devices. 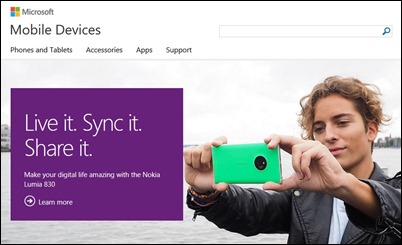 Given that the last two presented by mobile devices Microsoft the exhibition IFA which took place earlier this month still bears the name Nokia Lumia (Microsoft license for use of the name Nokia Call valid for a period of 10 years), The site highlights Nokia products launched by the company to date. But Microsoft recently began to gradually give up Nokia branding, Removing the names of various applications who currently wears only Lumia name.

Currently, the site Microsoft Mobile Devices lists, besides products Windows Phone (Smartphones and tablets Lumia series), and series devices Nokia X si Nokia AshaAlthough production devices in these two series was discontinued by the Company. Strangely though, the tablets of series Surface completely missing, as well as other Windows Phone devices not part of the Lumia series (such as HTC M8).

Samsung launches Galaxy A, a new series of smartphones with different design

HTC Nexus will launch on May 9 8 October

November 19
Back to top button
Close
Close
This site uses local cookies to give you a good online experience and cookies from Google and third partners for traffic and marketing analysis. Find out what cookies are used, what it is used for, and how you can turn it off by following the "Cookies policy" link. OKCookie policy