After announcing that it will cease production for evenings Nokia X, Asha si Series 40 (As well as other low-cost handsets in the range Nokia featured) To focus on the production of Windows Phone devices, Microsoft presented today at the cheap Nokia smartphone, Lumia 530That will run the operating system Windows Phone 8.1 and will be available at price only 85 €. 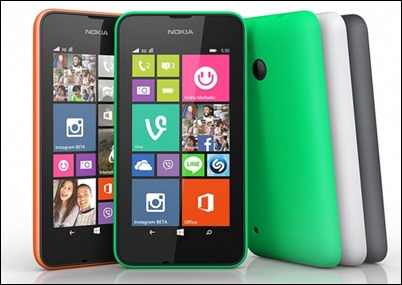 As you probably expect, Nokia Lumia 530 imporesioneaza not specifications: Screen LCD de 4 inches with resolution 854 x 480 (Pixel density 246ppi) Processor Snapdragon 200 de 1.2 GHz, 512 MB of RAMBoard of 5 MP (Does not have front camera), internal memory 4GB (Expandable through microSD) And battery 1430 mAh. But it will be enough to run smoothly applications such as Action Center si Cortana. The smartphone will be available in two versions, single-SIM si Dual-SIM and in several colors such as orange, green, white or dark gray.

For those interested, Nokia Lumia 530 will be available worldwide beginning in august this year.