Radamel Falcao is not the only player who has gold plated phoneCristiano Ronaldo and Mario Gotze and they enjoy such phones Unique! Ronaldo received after winning a second consecutive Ballon, while Mario Gotze received for the goal scored in World Cup finals 2014. Gotze has initials written on mobile phone!

Manchester United's striker, Radamel Falcao, does not refuse any whims, winning 250.000 pounds a week and this allows him to satisfy all his wishes. The last one was to like it iPhone Gold 24 Karate. It has a leather case that player's initials appear, RF. 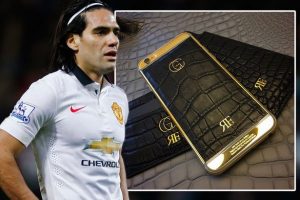 The image was uploaded by the player to his / her account Instagram. Change the phone was made by Swedes from Golden ConceptThose who sent them and a custom leather case for phone si a carrier card.