After the event for his new watch, Apple has released a new software update for devices iOSThat brings OS version 8.2. Although it covers many repairs problems discovered in recent months, its objective is to add smartphones of compatibility with its new Apple Watch. Currently, this feature can not be tested, because only in mid-April will begin pre-orders for the highly anticipated accessory. 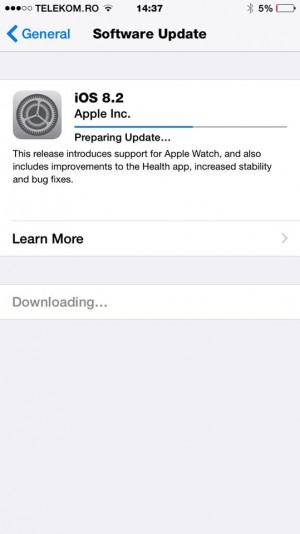 iOS 8.2 comes with a dedicated application called clock even Apple Watch. This will make the connection between the smartphone and the clock and gives access to the connection application. Processation can be done either by photographing the clock (which will probably display QR code the display) or by manually entering the device name. application Apple Watch it also includes a few video clips of the clock, as well as a reference to the section Apple Watch this AppStore, which will be active with the launch of the device in April. The moment you connect one Apple Watch the one iPhoneWill be installed automatically and application ActivityWho will monitor user effort. This app only appears on all devices iPhone 5 or newer. iPhone 4S si iPad tablets are not compatible with Apple Watch.

At the same time, Health application received major improvements. Can now be selected engineering units for distance, temperature, height and weight. The stability of the software has been optimized, but perhaps most important is that now can display information collected from other applications AppStore. A new option has been added privacy data application Health, Allowing users to stop recording the number of steps taken, distance traveled and number of steps to climb. List of improvements promises superior stability Mail, Maps si MusicAs well as optimum performance function VoiceOver. Small problems found in internal applications Apple have been corrected, as well as problems with certain connections BluetoothCertified for microsoft ExchangeAnd inconsistent in use Calendar application. 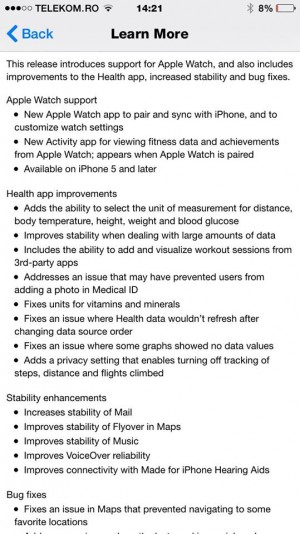 iOS 8.2 even in currently available on all devices that have received in the past iOS 8.0 si 8.1. The update can be performed either with a computer via iTunes by means of a data cable, or OTA (over-the-air). For the update directly from your device, download device varies: it can handle between 300 and 500 MB.

House of Cards, a new game for iPad