Nexus 6P of Huawei has enjoyed real success in the few months since last year's launch, becoming one of the most beloved devices by fans of the series. smartphoneATVs with branding Google. Given that this model will come out of production most probabil this fall, with the launch of new models Nexus of HTC, the company seems to be preparing a model to replace it, this time without a name Nexus. It is named Mate S2.

Mate S2 borrow aprowater completely the design of the Nexus 6P, the back cover being made of aluminum, and at the top, the antenna being covered with a slightly curved glass surface. The fingerprint sensor is positioned similarly to the one on smartphoneCPC Nexus, and the design on the front of the device gives up the slot at the bottom in favor of the logo Huawei. 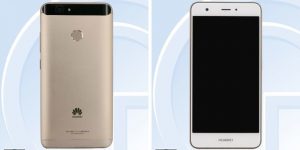 Nexus 6P was a device from the flagship range, with top hardware, but with a screen too big compared to what we usually find on the market. Therefore, the technical specifications of the new Mate S2 will remain at a high level, although the size of the device is reduced. Mate S2 It is equipped with new generation of chipsets from Huawei, Kirin HiSilicon 960, an octa-core 64-bit, 4 GB RAM, 16 and 8 megapixel cameras and a 3.500 mAh battery. The launch of the mobile phone and the price are not yet known, but whether it has reached a version of Mate S2 Board certification in hands Tena, it is possible to receive an official announcement in the very future ofpromarket. Of course, the launch of the device in China does not ensure availability in other regions.