Huawei Ascend P6 is proud to be the thinnest smartphone with a body 6,18 mmHaving a metal casing that weighs 120 gramsThat compared to iPhone 5 has just 8 grams more and thick 7,6 mm.

Ascend P6 It comes equipped with a display LCD de 4,7 inches with resolution 1280 x 720pA quad-core processor 1.5GHz si RAM 2GB. While users may be dismayed that P6 It has storage space than just 8GBA card slot microSD allows you to add up to 32GB multimedia. 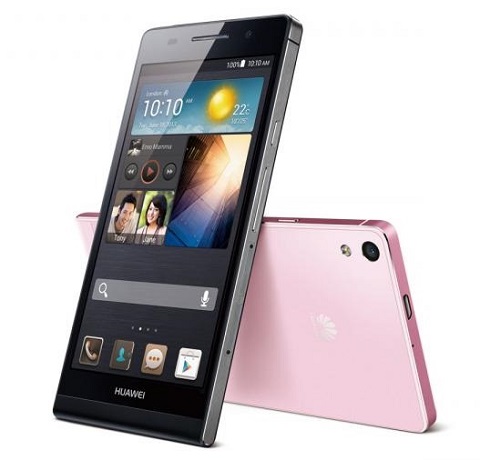 The main camera of the phone is 8 megapixelsWith lens f / 2.0 BSI a macro 4 cmAlso with video recording and playback Full HD 1080P, and the girl has a camera 5 megapixels. With proprietary software Huawei IMAGESmart, HUAWEI Ascend transform P6 a professional photographer even the most novice with improved contrast and color, auto scene recognition, object tracking focus, and instant facial support.

The operating system is Android 4.2.2 and will Huawei Emotion UIWhile fans AV will be happy to see this phone delivering sound Dolby Digital Plus. Proprietary user interface includes updates to Uni-Home including improved security, Huawei Me Widget, MagicTouchand SmartReading.

It has a battery 2.000 mAh optimization software and a battery, and this energy saving technology improves performance by more than 30%Compared with the smartphone batteries of equal size and has GSM / UMTS / HSPA + radio to complete the return characteristics

HUAWEI Ascend P6 available in black, white and pink and the phone will be launched in China June and Western Europe by Vodafone, Telefonica, Orange, H3G, O2, Carphone Warehouse, TalkTalk, Media Markt TIM si Saturn July and 19 countries by the end of this month. A total of 100 nations will Ascend P6 until the end, and a version LTE will launch sometime in the fourth quarter.

Most Europeans will have to set aside € 449 (601 dollars) for this smartphone, but still waiting for details.

A new competitor in the market HTC Butterfly S