Huawei, With the latest models launched 3 strengthens its position in the world ranking and always captures spectacular smartphones that put the alarm competitors. The new Huawei Ascend P2 presented at the MWC 2013 Barcelona is currently the fastest smartphone allows speeds download for free up to 150Mbps. Equipped with a Quad Core by 1,5GHz the new Ascend P2, planted on a platform Huawei K3V2, Ascend P2 manages to cope with the most demanding multimedia applications and thus satisfy the demands of the most demanding customers. 4,7 only "IPS LCD display", protected with new technology Corning Gorilla Glass 2 allow HD resolutions 720p is probably the only disappointment, but compensates by 13MP room that can be achieved due BSI sensor captures Full HD 1080p and functions HDR, the front camera being more useful for video calls. Due to the very advanced photo module, Huawei Ascend P2 becomes the thinnest model with the 13MP camera on the market, its thickness reaching only 8,4mm. 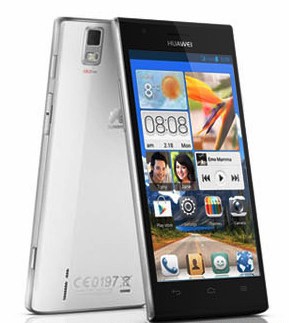 Another impediment for some users is the internal memory of 16GB, which can not be supplemented due to the lack of a card slot, but can be compensated by cloud storage solutionsGoogle Drive, Box, DropBox) which are also available in free versions and where you can save your favorite files. The connectivity compensates for the weaknesses presented above, especially thanks to the LTE Cat.4 support that allows transfer rates that can compete with the fixed internet connections, the download reaching up to 150Mbps. The new Huawei Ascend P2 runs Android v.4.1.2 Jelly Bean customized with an 1.6 UI interface that is increasingly similar to the iPhone and allows a wide variety of themes for all tastes. The autonomy of the new Ascend P2 is ensured by a Li Ion 2420mAh battery, which can provide a standby time of up to 310 hours and probably an intensive use that can keep the 24 gadget for hours. Huawei Ascend P2 will be available in France from April and somewhere in June probably for the rest of the markets.

Samsung Galaxy Note 8.0, the new 8 tablet '' will be available from April on the market