As we can deduce from the name, Wildfire S is the successor of one of the most cheap HTC phones, HTC Wildfire. 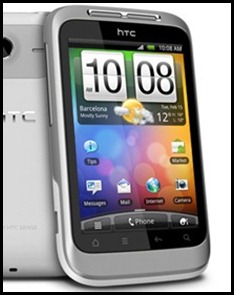 At MWC 2011, HTC has introduced besides the above mentioned models and the Wildfire S, specifying only a few features that make it different from its successor.

First, HTC Wildfire S comes with a display of 3.2-inch cu HVGA (320 × 480), and in terms of system performance, the phone benefits from a procesor de Qualcomm 600MHz cu 512MB RAM si ROM. As options connectivity already find traditional Wi-Fi, Bluetooth and GPS. On the back of the phone is 5 MP camera lit by a LED flash. Operating System Android is a certainty, but do not know which version is installed official launch will take place in 2 th quarter of this year.
The phone will be available in Europe and Asia in three colors. Purple, black and white. Price of HTC Wildfire S will be made by each operator by subscription that accompanies it. Available for those who want your subscription.
HTC Wildfire Vodafone was added to ~ 89 € with subscription Vodafone Complet 800 + Mobile Internet Plus (~ 16.64 EURO / month).