One of the indisputable advantages of Platform Android in front of contestants iOS or Windows Phone is offered free software developers, giving him a chance to put their creativity to work to create unique products. An example is the drupe, or application Android proposing an alternative to the classic original phone book.

Formally launched few days ago, the Drupe Android app trying to solve possible problem that have hit users who use multiple communication channels and have a consistent list of friends who often keep in touch. In place of the traditional local agendas and contact lists within each application separately, Drupal application propose a visual medium based on drag and drop the user can easily opt for both contact who wants to contact and for application through which it intends to do.

After the installation, activation of system integration Android notifications and completing the tutorial, Drupal application will be activated and will present discrete signal through a side button with four points. Subtle button is available in Home Screen, in Lock Screen and in any program that does not work in privileged mode Full Screamn, highlighting its access to floating interface Drupal application. Drupal provides a simple graphical environment that is shared in two vertical columns, one on the left is dedicated contacts, and the right applications with which it can interact.

Normally, drupe It will only display your favorite contacts book, but the user can manually add individual contacts and even groups. In this latter case, the user can transmit a single move a message to more people. Through a simple lateral movement, it can be substitued contact list of recently accessed contacts list, an easy way to centralize the messages exchanged with people who are not saved in the contact list drupe. The right column includes favorite applications can interact with Drupal. Unlike contact list that offers the possibility of saving an unlimited number of people can display the list of applications only seven shortcuts. Drupal integrates with standard telephony services, messaging, email and calendar, but also with other applications such as Skype, WhatsApp, Facebook Messenger, Google Maps and others.

How is ingenious and extremely simple. Once selected the desired contact, the user will have to pull it over the icon you want and everything goes by itself. For example, in this way the service activation email client will open all the data associated with pre-fill application Google Maps will open directly in navigation mode, and Calendar will establish a meeting and will automatically send invitation and rigor. If the contact has multiple identifiers, drupe will require clarification and missing information will be filled in.

Along with these functions, Drupal application provides a search field for contacts and a numeric keypad with autocompletion for telephone module. Unfortunately, the app does not offer many options for customization, the user can only choose background color or semi-transparent display mode contacts in Lock Screen, but probably drupe does not need too many. 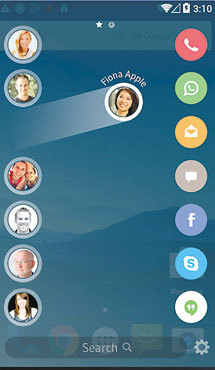 Currently, the application does not lack any problems. So, the list of contacts is not clear if you have two people with the same name who do not have an associated avatar, Facebook Messenger groups are not recognized as Drupal groups for messaging, and some modules, such as sending a request to indicate the address, are not implementation. Drupe is a product at the beginning of the road and the developer is active and willing to optimize the application as quickly as possible.

Drupe is a free app for Android phones and can be downloaded from Google Play.

February 5
Back to top button
Close
Close
This site uses local cookies to give you a good online experience and cookies from Google and third partners for traffic and marketing analysis. Find out what cookies are used, what it is used for, and how you can turn it off by following the "Cookies policy" link. OKCookie policy