Bluetooth is a technology appeared far ahead smartphoneand was integrated on Smartphones from the beginning. Allows the transfer of files between two devices without the need for a cable connection, Internet access or transfer card.
By Bluetooth can send and receive files (Photos, documents, contacts) between two Mobile Phones, smartphoneplants, between Windows PC and mobile phone or between phone and Mac OS X.

Sharing files between two mobile operating systems Google Android or Windows Phone It is very simple just a few taps on the screen, without the need of additional settings. When it comes to transfer files between a mobile phone Android and Mac OS X, we need to make some settings on OS X and be a little careful.

Before you start transferring between a smartphone Google Android and Mac OS X, we will need to prepare our Mac for transfer. In our case, we have one MacBook Pro with OS X El Capitan and a smartphone Samsung Notes 3 cu Android Lollipop 5.x.

We ensure that we Bluetooth enabled on OS X and has Permission to share files. Sharing files via Bluetooth.

go to System Preferences la Sharing and click on the icon to open Sharing settings. 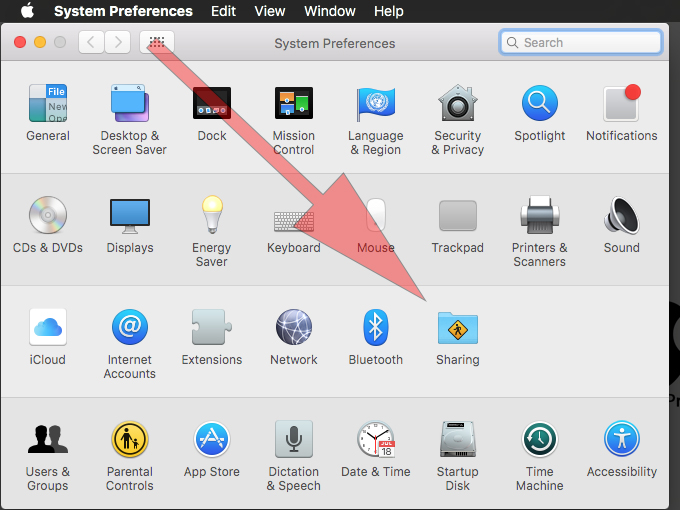 In the Sharing menu options, go bar on the left and activate file sharing services for Bluetooth. Bluetooth Sharing. 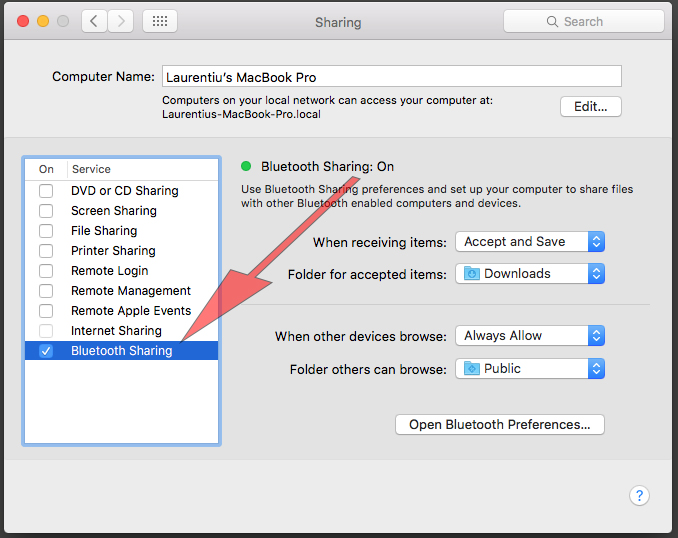 The next step is to activate Bluetooth on Android and SETEM visibility to device, Astefel he can be found and identified. go to Settings > Connections > Bluetooth and tick the option "Visible to all nearby Bluetooth devices" 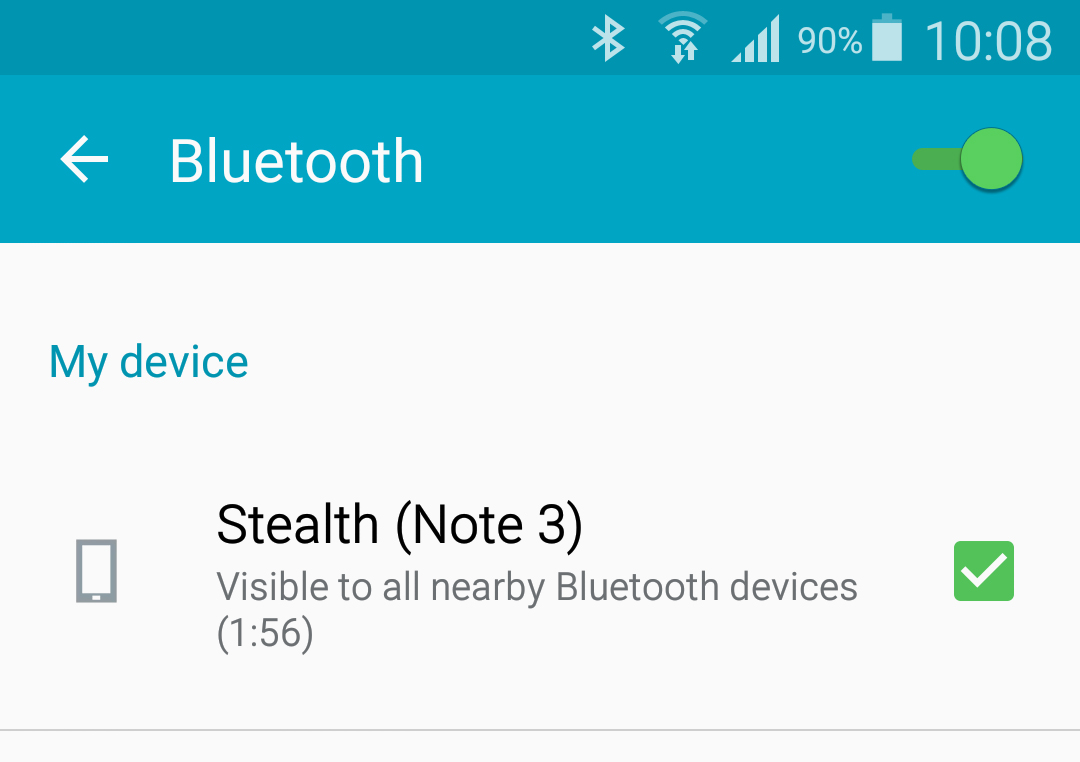 After this step we have to do the pair between OS X and Android. We initiate pairing the two devices either on Android or on OS X.
On OS X, go to System Preferences> BluetoothAnd new scanning device sites will start automatically.

After having identified your device (Stealth notes 3, in our case) we click on the "Pair".
On OS X will be sent a code that will be confirmed on Android devices. 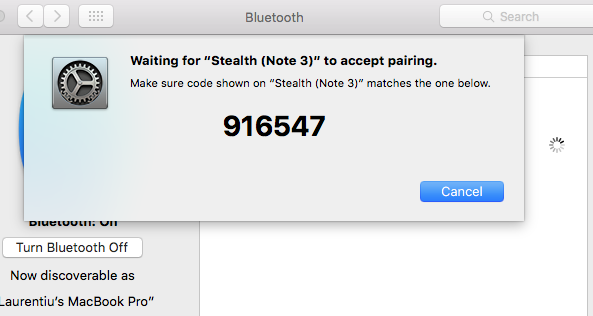 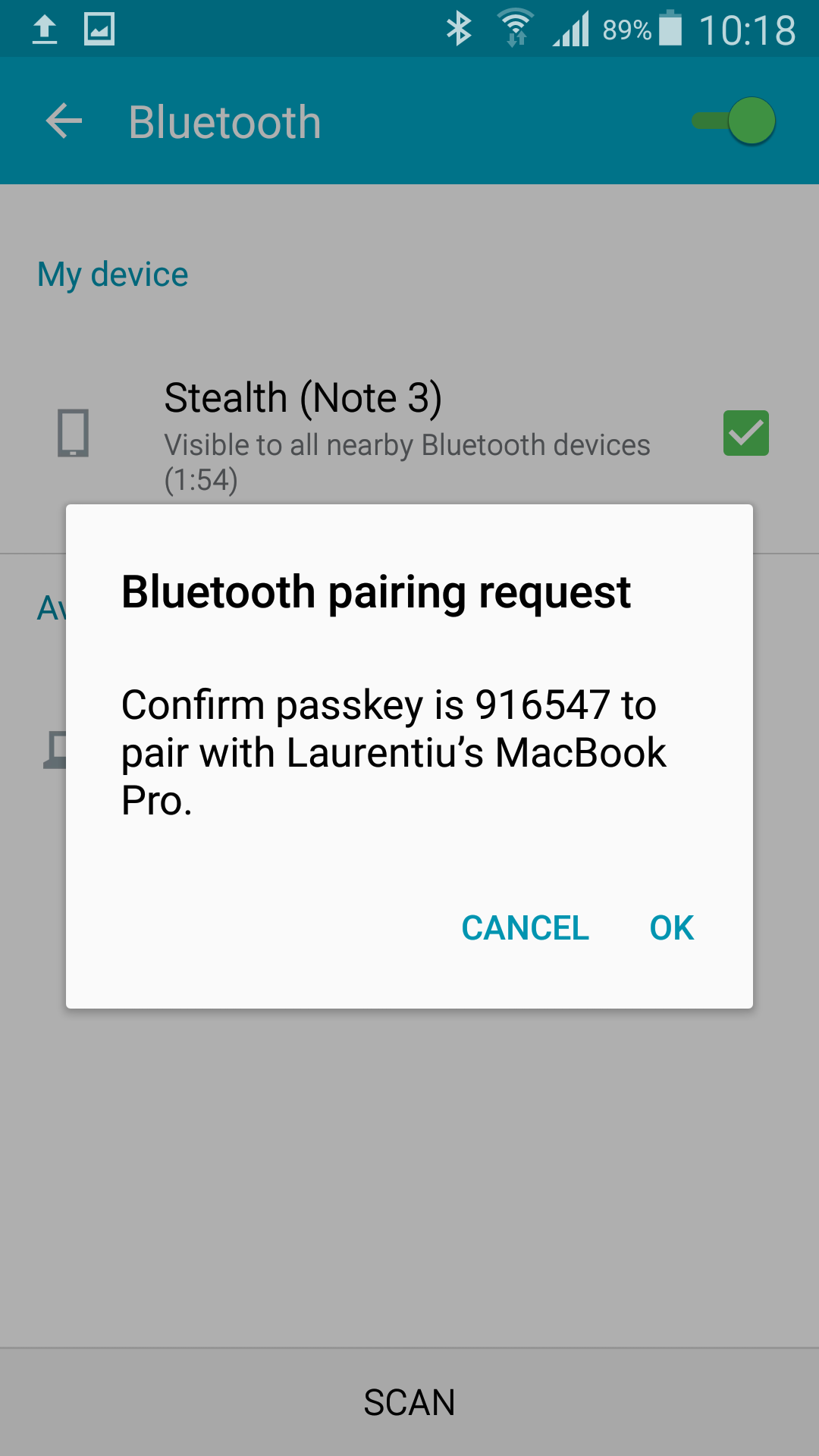 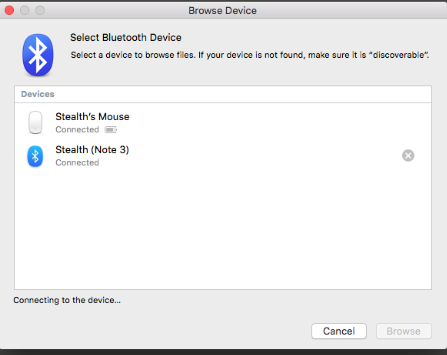 Transferring files between OS X and Android is as simple as between two Android phones. Select the file or files you want to send them MacBook from your phoneOpens the Share menu, and then select Bluetooth devices by which we want to dispatch the files. 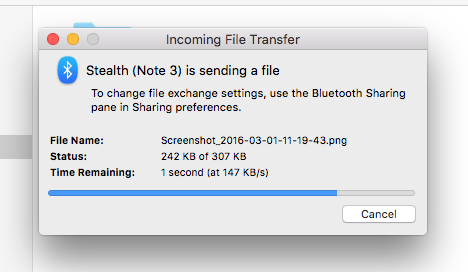 Transferring a file from OS X on Android via Bluetooth

The easiest way is to go on OS X System Preferences> Bluetooth capabilities and tick the option "Show Bluetooth in menu bar". Open the Bluetooth option from the menu bar, select smartphone we want to send the file, then click on "Send file to device ..." 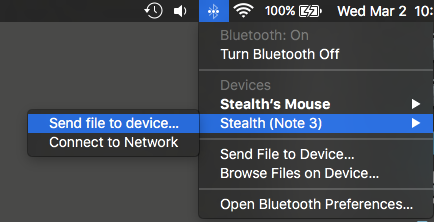 This tutorial does not require installation of any software applications or other help. Bluetooth technology is integrated on all operating systems Android si OS X.

How to set up a Bluetooth connection on OS X and how to transfer pictures, fiches, documents and other files between Android and a MacBook OS X.

March 10th 2018
Back to top button
Close
Close
This site uses local cookies to give you a good online experience and cookies from Google and third partners for traffic and marketing analysis. Find out what cookies are used, what it is used for, and how you can turn it off by following the "Cookies policy" link. OKCookie policy