He has been talking lately about the new Android Nbut Google had trouble finding a name for it. The company decided to leave the community choice, offering a site to write suggestions. So, there has been a result that may seem surprising to some: nougat. The announcement was made via a video clip that includes the statue unveiling Android front seat Google.

Android 7.0 "N" was Nutella, joining the mobile operating system of a famous brand proved to be a successful strategy in the past, because we think about Android 4.4The latest version before changing interface Material DesignWho was called KitKat. 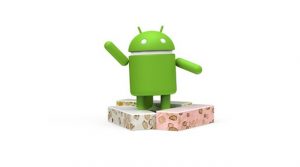 With the choice of name nougat, It seems that Google begins to limit the importance of these code names. The new Android Nougat will come up with changes in how multitasking works, will optimize the function Pickups, adds the ability to create windows like desktop operating systems for hardware makers who want this capability, and will bring some other new elements into the interface to facilitate quick access to various features.

April 29, 2020
Back to top button
Close
Close
This site uses local cookies to give you a good online experience and cookies from Google and third partners for traffic and marketing analysis. Find out what cookies are used, what it is used for, and how you can turn it off by following the "Cookies policy" link. OKCookie policy